Frozen is a coming-of-age story quite unlike any other Disney animation movie because of its white feminist essence. Much like all other works (Wonder Woman, Captain Marvel), white feminist actors and filmmakers come at us with their technical proficiency and prowess and unleash their empowerment in the subtext of the white man’s template. But, you could choose not to see the essence and consume it as simply another Disney adventure.

In Frozen, an ingenue becomes aware of herself through her choice of partner, and a matronly sister afraid of her own superpowers comes into her own by letting it go. The villain is male, and the strongest male character is in a supporting role, but they get more to do than most movie supporting characters. And there is a reindeer, a snowman, and mountain trolls with magical wisdom and quirky wit. Wondering whether people with marginalized racial-ethnic backgrounds are identified as these “magical creatures” lands us in a murky zone; but gender-wise, they are an amazing way of identifying the marginalized in Disney movies.

Frozen 2 picks up on this essence and rolls with it, changing and evolving into a hopeful narrative for the future. It is once again a white feminist narrative, but quite overtly so. Disney was likely pushed by the fear of Jennifer Lee (co-writer, co-director), Idina Menzel (lead singer and star), and Kristen Bell (pioneer of the teenage feminist narrative in Hollywood) leaving the project if they gave up this feminist essence. The villain is male and much more sinister, and the previously ‘leading’ male character comes to accept and assume a supporting role. What gives us hope is the white guilt of the Disney princess urging her to see the past and usher us into a better future.

We know the past, or know of the past. A bunch of power-hungry, white men tried to take over the world and failed, leaving in their wake a summary desecration of the very essence of being human. We don’t necessarily see this past. That is because we inherited much of the comfort we live in through this privilege. In Frozen 2, Queen Elsa listens to herself and takes an odyssey into her past to see where her privilege comes from. And like us, she knew of it, and she probably knew it was evil, but chose to live on, facing her day-to-day obstacles. Now, she chooses to do the difficult thing, and sees the past and relives a betrayal so colossal by the evil white man, that nature retreated into itself. Nature shook the earth and darkened her city to urge her to see. And she inherited her power to rule from this and she falls into herself unable to, in all her physical power, find an antidote to move on. But the ally Anna comes into her own, pushing herself into every quest, calling Elsa out on her individual/existential adventure (it is the history of all white people). Anna moves forward, her male allies finding it in themselves to embrace the supporting role, and sees it through to the end. This act of great courage and empowerment makes Elsa come back, and she saves the day (for everyone, this time).

In Frozen 3, if all goes according to overt white feminism here, Queen Anna, now ruling the nation, will need to take down all her grandfather’s statues and change the honorary titles and places named for him. With this act, a majority of her people will turn against her. Why won’t they? Elsa has the great privilege of following her voice. But even among us who are similarly privileged, we have to work for a living and cannot leave our cats unfed to take on a grand odyssey to reshape our identity. Anna will also face the dilemma of whether her claim to power is legitimate and if she chooses to democratize now, the majority who want the grandfather’s name reinstated will win.

Will she trust her people to change? How will she persuade them thus? Her sister has become a nature warrior, and on foreign shores, the authority of evil, white men is continuing to lead the world on a destructive path. Will she take the fight to them (Greta Thunberg, essentially)? How will their paths cross? More importantly, will we see them empower someone less privileged, and take them to the top?

I simply cannot wait for Frozen 3.

1. Girls can love boys and have their hearts broken.

2. Girls can love boys and not have their hearts broken.

3. The right man will love you when you finally stuff yourself with femininity and other gender attributes. 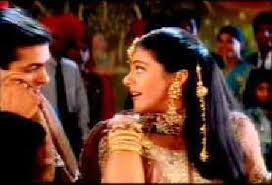 4. Thoughtlessly leaving people at the altar is the best way to show how in love you are.

5. Even if you are 100% doucheface man, if you get a woman to love you, you will be 100% fine and societally accepted. Karmic romantic redemption is not a necessity for men.

Pictures with text from: http://perilsofbeing.tumblr.com/post/19027506016/bollywood-recap-kuch-kuch-hota-hai

Context: A couple of weeks ago, Genderally Cinema ran this piece: https://genderallycinema.com/2016/03/09/six-tamil-heroine-introduction-songs-actually-about-the-heroine/ about Tamil movie songs that introduce female protagonists, and actually describe them and their feelings, vs being used as prop to further a cis-male focused story. One of our readers wrote in this excellent piece, she questions if women in Tamil cinema are really singing about themselves the way men do.

I completely agree with your commentary on the positioning of women in cinema: “Often, they are characterized to sing about men, or about having to experience love or romance, and are often used as a prop for the male protagonist in the film”. I hardly get to see heroines playing roles of significance or roles that break the female stereotype in existence today.

However, to be honest, I am not very sure if the list of songs that have been put together here portray or cherish womanhood. In some sense it also falls prey to the stereotype of how lyricists pen down women in their poetry. Whilst songs such as ‘En Peru Padaiyappa’, ‘Naan adicha thaangamaate’ ‘My name is Billa’, and ‘Maari’ describe the power and strength of men and depict them as the superheroes with no force standing a chance against them, women are always characterized to see themselves as as a happy-go-lucky blissful girl who seems to care only about her day to day living or her unison with nature.

Jyothika in ‘Kushi’ is all about stopping the rain at her will; yes, she does compare herself to the wind with no wings (a.k.a limits) but in the movie, right after this song she is seen forced into marriage. “Konjum Mainaakale” from Kandukonden is an all-time favorite melody, sadly again the song talks only about the woman’s association with nature; where all Aishwarya Rai wants is to celebrate Diwali and to see through that her roses bloom right after she plants them. I am not saying that it is wrong as a premise, but all the song is conveying to me is women are soft, innocent, gullible day-dreamers who live in a world of fantasy where men can walk right into us and our lives.

With cinema creating a huge impact on people’s lives today, it is sad to see songs such as, ‘Adidaa Avala Othadaa Avala Vidra Avala Thevayae Illa’ and not the ones like ‘Uyire Uyire Vanthu Ennodu Kalanthuvidu’ capturing the audiences.

One cannot just blame the Indian entertainment industry, songs from the Western world also describe women as lost in love or waiting for love. But at least, there, I can name a few songs that promote female empowerment where women are shown as strong and independent beings, who have their own accomplishments. Just on top of my head: “Independent Women” from Destiny’s Child, “Confident” by Demi Lovato, “Warrior” by Kesha, “Roar” by Katy Perry, “Run the world (Girls)” by Beyoncé, “Girl on fire” by Alicia Keys and of course not to forget Pink!
I would like to sign-off with one last question with reference to a famous quote: “Behind every successful man there is a woman” , but where is your success story Girl?

Iswariya is a researcher; Chennaiite at heart, German by profession. Chocoholic and shopoholic.

What we write about